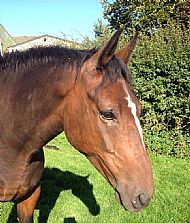 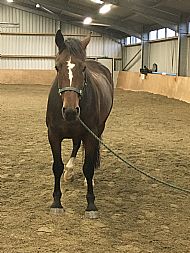 He was very spooky and suspicious of everything and is still like that today. He has always loved food and really would just eat all day long.

Events he took part in and results;

Dressage Torfy competed a lot in dressage before he came to us. He was very successful at both Prelim and Novice Level and had completed in his first Elementary test before we bought him.

Showjumping He had competed in local show jumping as part of his education as a young horse and is a very careful jumper and surprisingly not bothered about spooky fillers.

Cross Country He has jumped round Duns Castle Team Chase and also mini charterhall a few times. He was very spooky the first time he went to charterhall and poor Stacey got jumped off him. I then took him the next year and he was much better. He loved the team chase as he was very happy following another horse.

Showing Torfy had won lots of showing classes before he came to us 😊 This year (2019) at Duns show he finished second in the Ridden Hose class and won the working hunter class. He went on to be the champion ridden horse and Reserve Champion of all horses. The judge said he was by far the nicest horse to ride.

When he became a vaulting horse and where he competed

Torfy came to sunnyside Vaulting camp week July 2016. He vaulted 3 days in a row and took to it straight away. He went to his first competition in Rugby Warwickshire the British Championships October  2016 and carried a pair to win the class and also carried 4 walk individuals from another club.

When he became an International Horse

He also carried Emma in the Senior class to finish 24th. He works hard at vaulting but he is not keen on carrying more than one person so has become the individual superstar. Last year he was British Champion with Willow Belham and Scottish Champion with Grace Playfair and Hannah Young.

When he came to Sunnyside and began helping RDA

He arrived the first week of July 2016 and practised all summer so he was ready for the term starting in the September. He took to it straight away and has never looked back his only bad point being he can walk very slowly and used to always pretend he needed a pee!!!

Torfy has been to the national Championships once but has done the regional qualifiers 3 times he has always been very reliable and surprisingly not spooky at all whilst doing his Dressage.

Hunting Torfy loves hunting he is deep down a very lazy horse and hunting lights him up and makes him quite excited, he jumps brilliantly out hunting and loves galloping across the fields. His one problem is he might just kick a hound so whoever is riding him gas to be very aware of this.

What he is doing while we are not doing RDA Torfy is enjoying lots of hacking out and has even been taking Tamara out riding. He does lots of RDA and vaulting so we are using the time to keep him fit and happy with lots of hacking and cantering in the fields he is still very spooky!!!!

He is a brilliant jumper and has also won championships at the local shows.

He is a great hunter although not always keen to go first he very happily follows his friends.

He came here by chance. I had looked at him when he was 5 but decided he was to young for all the jobs we needed him to do. 2 years later his breeder emailed me asking if we were interested in him. He arrived the week of vaulting camp and took to it straight away he has gone on to compete at world and European championships in vaulting. He enjoys x country’s but can be very spooky so you have to be ready for his ducking and diving.

I also had his mother as a vaulting horse so it’s lovely to see him progress he has many similar traits to his mum. 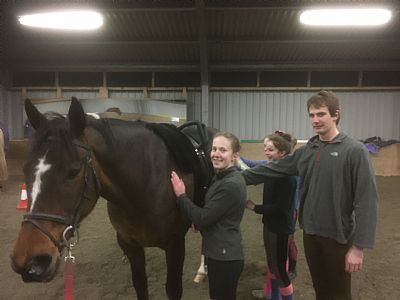 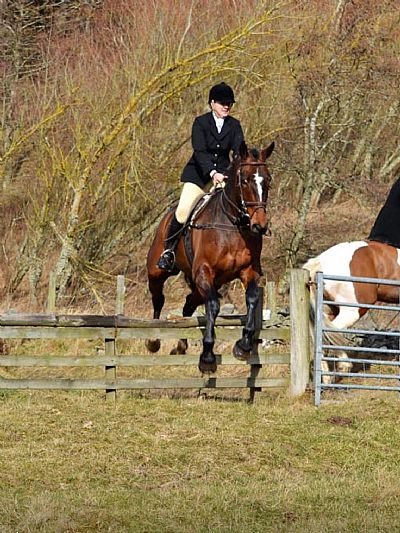